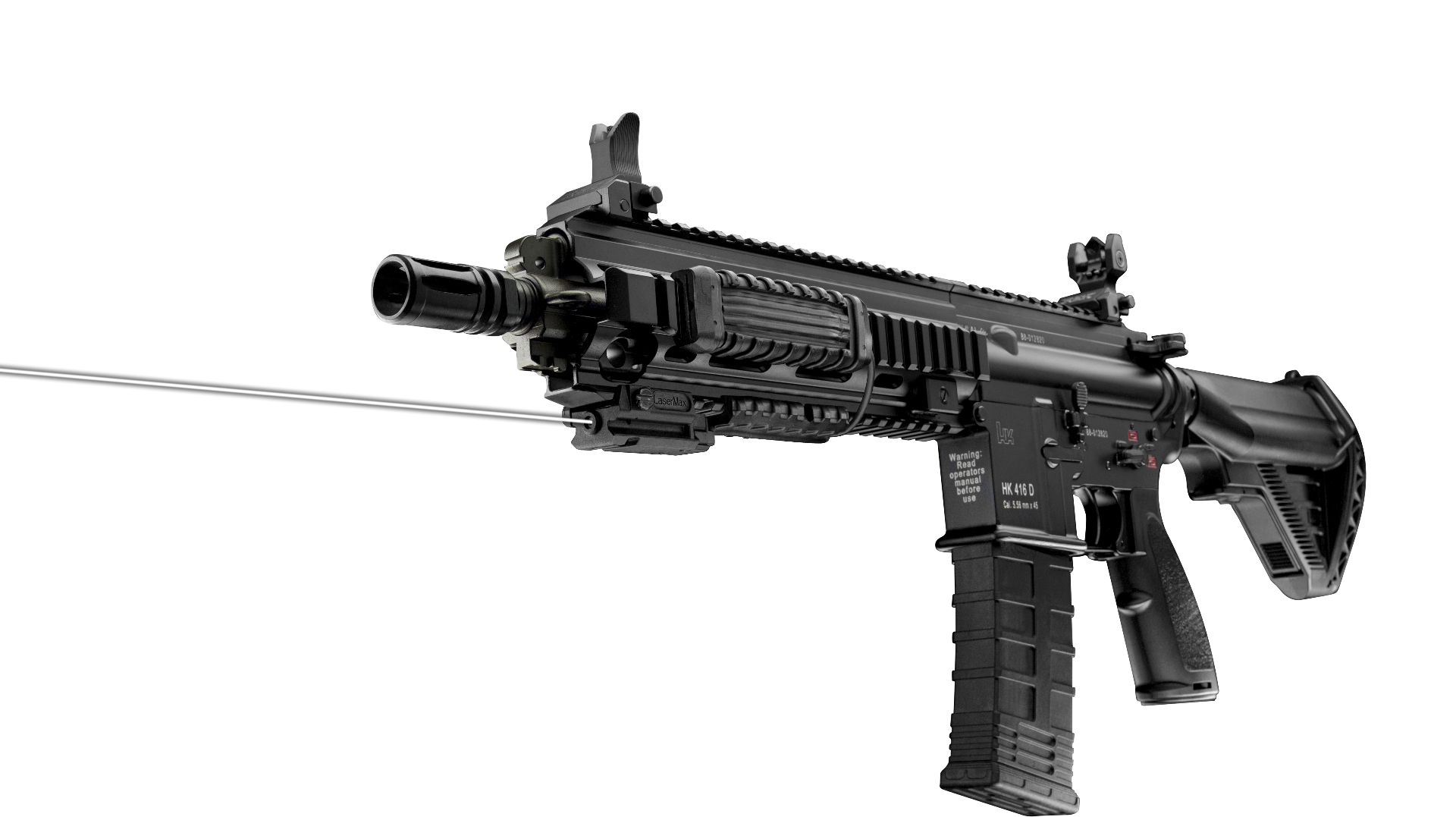 Never in a million years would I ever predict writing anything about weapon mounted visible lasers. Why? Not because I thought they were inadequate in defensive shooting, or they were a gimmick in shooting sports.  I am simply a minimalist when it comes to my guns; attaching anything that isn’t perceived as “necessary” has always been out of the question. Up until recently, visible lasers fell within the excessive category with accessories for my guns. But…times change, and we as shooters should explore changing with them…to an extent. Technology, innovation and methods of training is changing the historically consistent ecosystem of shooters. We now have ARs that eliminate the need for magazine releases and bolt catches. Optic companies are releasing Night Vision devices that are so High Definition that you can pick out finite detail on the objectives face. LaserMax is at the tip of the spear when it comes to lighting, visible and IR laser aiming devices. Jay Duncan from LaserMax convinced me to give the UNI Rifle Pack a test drive at SHOT this year. So, we brought it to Afghanistan, if it holds its own there; it would be reasonable to think it will hold its own in less austere environments. 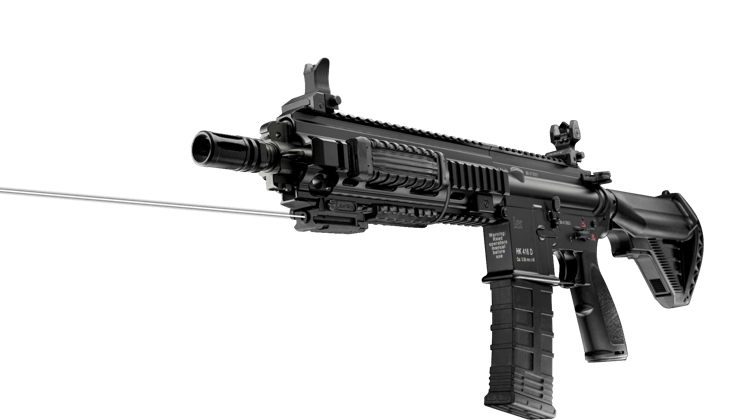 Visible lasers…In combat, the jury is still out and will appear to be for quite some time. Again, not because of what they are, but how they’re used. Today’s combat typically fought at night where surprise, speed, and violence of action are what wins battles. If the warfighter uses visible lasers, the surprise element virtually goes out the window leading up to an objective. If you can see it with the naked eye, so can the bad guy! IR lasers are the most preferred laser system in combat operations! 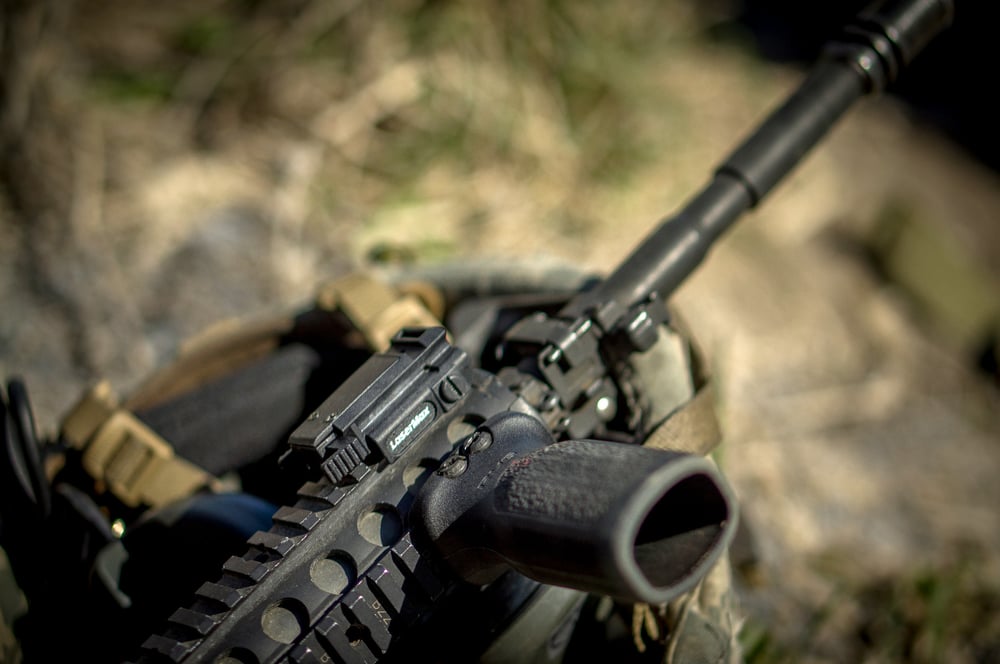 Going into the 2-month test in Afghanistan with the UNI, we expected it to perform just as advertised, however, the expectation management piece of our perspective was difficult to keep in check. We intend to train extensively in Close Quarters Battle (CQB), Protective Security Operations (PSO) and Motorcade operations with LaserMax’s UNI rifle pack, simply because in all three, the element of surprise is already blown and speed, with violence of action is security and primary enablers to getting off the “X”.

At home; in a defensive situation, lasers can be very practical. You’re not sneaking and peeking around your house if there is an intruder. Chances are you will be loud and announcing what you intend to do to said intruder should you come face to face…or within a rooms distance if they don’t get the hell out of your home!  We ask that you continue reading before making your mind up, if you have been teetering on the proverbial fence. Before moving forward, we are prefacing this entire article with “The laser discussion is almost as rigid as the 9mm vs .45 ACP, or AR vs AK quarrel”. Prior to SHOT 2017, you could find me on the “NO VIS Laser” side of the fence. The UNI – MAX from LaserMax has changed my mind in the realm of long gun visible laser applications.

Have I mentioned that I don’t like unnecessary shit hanging off my guns? If you missed it…I don’t! My utopia for practicality lies as close to “stock” as humanly possible. Translation: If aftermarket parts are going to be bolted, velcro’d, or screwed onto either system; size and weight had better be virtually nonexistent. The UNI MAX is just that. The laser itself occupies 1.75” of rail space and weighs about the same as a .45 ACP round…battery included. If you decide to install the Momentary Activation Switch (pressure pad), you’re looking to take up another 2.5 inches of real estate, this is if you are using the integrated pad sleeve that clips anywhere with a picatinny or weaver rail which makes the system that much more modular.  Manipulating the MAS is achievable from just about every angle, from any shooting position; gloved or ungloved.

The UNI Max itself is stackable. When we say that it is the same size as a match box…we’re not kidding! It is slim enough that you can incorporate it into gripping the handguard or rail with your support hand. Let’s just say that we were not minimalists, and more was not enough, yet rail space was limited. CLEARLY, we would need a flashlight somewhere on our rifle, or pistol. The UNI was designed to stack other accessories atop with the same picatinny or weaver mounting hardware. In our case, we slid the Surefire’ X300 Ultra to the UNI; truth be told, it was not as cumbersome as I had initially imagined, and if I’m being completely honest; the UNI brought the light off the side enough to clear the Armageddon Gear suppressor cover we had previously installed over our can. We have experienced tight profiles with weapon mounted lights in the past with suppressors, only to experience a 40% decrease of the lights flood. The shadow cast by the X300 was minimal and was easily used in conjunction with the UNI laser when doing house work.

Zeroing the UNI Max was simple. The only issue we experienced was over compensation with both windage and elevation with the supplied key. Take everything you have learned about bold adjustments and throw them out the window, use minuet adjustments when zeroing the aiming device, a simple 1/8th turn will take your laser and move it completely off grid. Our practical applications suggested we zero the laser at 15 meters since most our engagements take place within 25 anyhow. There are many theories behind zeroing lasers, and if you adjust them the same way you would an optic, at closer ranges (where you need them) your shot placement will be significantly off. Remember, you’re not sniping with these things…they are for quick target acquisition. Leave the laser sniping up to Hollywood!

The visible weapons laser was designed to be used in close quarters and limited visibility, zero it in those conditions; if you’re new to this like we were it will save you the frustration.  Some will say not to co witness to whichever optic you have in place for consistency; we did it to make the process easier rather than chasing our rounds around the target. Keep in mind the ultimate use for a laser is for extreme acquisition of targets. Train to look over the top of whatever sight you have, this should be done during the zero process to 1). Adjust your point of impact as necessary and 2). Train to get comfortable with something that you have minimal experience with.

One of our initial reluctances with shooting viz lasers is the idea of forgetting what I have been demonstrating for the better part of two decades. Sight alignment/sight picture being crucial fundamentals of shooting, as hard as I tried, I could not disregard them! Looking through the Leupold HAMR or Delta Point Pro picking up the competently bright green laser end, was a hard habit to break simply because muscle memory kept telling me to find the red dot, or reticle. To completely disregard either point of reference to locate and use the new aiming point given by the UNI MAX took some practice. Eventually, my eyes fixated to the green aiming point supplied by the un noticeable diode. With practice, we were looking right over the sights and drilling targets!

At noon when the sun is at its highest, 50 meters is about all we got out of the UNI Max, from a prone supported position. Anything beyond the 50 took additional time and help of the HAMR to find the green dot on our target. We waited for the sun to go down to stretch the UNI’s legs. At approximately 1800 (6 P.M) we stretched the lasers capabilities back to 150 meters. The laser was visible to the naked eye. Beyond 150 we solicited the use of the HAMR to acquire our dot.

LaserMax had enough forethought to equip the UNI with two different light emitting settings. A constant beam which is optimal for close quarters and low/no light situations. Most our testing was done in this mode due to its usability. A rapid pulse beam is also available with the UNI, designed to help the end user find the point of reference in brighter environments or at longer distances. The human eye is more apt to fixate on an inconsistent (blinking) point, as a steady dot can and will blend into its subject. The rapid pulse is exceptionally useful during multiple target engagements where gross motor skills are required to transition and drill each target.

LaserMax’s UNI comes from the factory with just about every bell and whistle available to make it practical and user friendly. The base in which we tested and reviewed the product required all the accessories necessary for mounting to a shoulder fired system.

Pressure Pad: Also, known as the Momentary Activation Switch (MAS). Optimal for long gun use, a quick touch of the MAS, you instantly have either beam painting targets. The UNI also comes with a manual switch installed. This switch can be used for rifle work, however the end user is taking a chance of breaking it, as it’s plastic and optimal for pistols.

Quick on/Quick Off: The UNI has an intuitive spring loaded screw that secures the device to any picatinny or weaver rail system. The standard slot screw allows for quick installation and adjustments if needed in the field.

LaserMax’s UNI weapon mounted laser device is a piece of gear that can be added to and used for tactical or defense weapon systems. We cannot stress the importance of training with it before you mount it, zero and depend on it for survivability. The UNI is available with either visible and IR diodes. Unfortunately, the UNIs visible laser come in green only, but as cutting edge as LaserMax is, we would not be surprised if they released the device with the red laser too.

For under $200 you get a dependable laser that holds its zero, is lite, and slim and is the most adaptive laser on the market. The UNI [and all other products] carry a five-year warrantee from the date of purchase. If you break it, the laser fails or is otherwise faulty, simply register the product and send it in for repair or replacing.

We will be outfitting our home defense weapons with a UNI on one capacity or another. Whether it be a handgun, rifle or shotgun each will have a laser installed, zeroed and ready to defend what is ours!